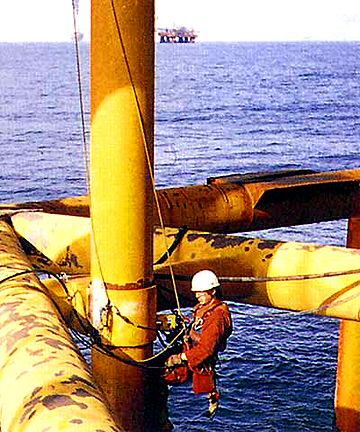 No man is an island

We’re guarded. We’re fearful. We’re so angry at each other because we don’t see each other, really.

Though much has changed in recent times, the message that “boys don’t cry” is still powerful in the lives of men. But in a story reported by Invisibilia, some of the toughest men of all – oil rig workers – received an intensive course in vulnerability. The fascinating part is why.

Claire Nuer, a leadership consultant, teamed up with Rick Fox, an asset leader for a deep water rig for Shell, to get the men that would work there in better touch with their feelings. As the men – and therefore the company culture – transformed, Shell’s accident rate dropped by 84%.

As Nuer had predicted, training these men to be open and vulnerable helped them communicate better, ask for help more often, and not try to do things alone out of pride or over-inflated self-reliance. “Part of safety in an environment like that is being able to admit mistakes and being open to learning — to say, ‘I need help, I can’t lift this thing by myself, I’m not sure how to read this meter,'” says Robin Ely, who wrote about this in the Harvard Business Review. “That alone is about being vulnerable.”

The process was far from painless. I was deeply moved reading about these men’s experiences – the toughness that was instilled in them, the hardships they experienced growing up, and the ways this work transformed their relationship with their families and with themselves.

Tommy Chreene, who had a tough reputation, broke down and wept before the group as he talked about his son’s terminal illness. “I was weeping like a baby,” he says. “And nobody ever come to me and said, ‘Aw, you big crybaby.’ “

Fox himself transformed his relationship with his son, Roger, before putting Nuer’s work into motion with his staff.

I’m so grateful my son did not have to wait till he was 40-something years old to have the experience of being able to question his own habits and his own way of thinking about things,” Fox says. “My son is a beautiful human being, and I cannot get enough of being around him.

I am constantly amazed by how much more we can achieve, and how much stronger we are, when we are vulnerable than when we are closed off. Thanks to one of my clients, a man among many dealing with old messages around toughness and self-reliance, for pointing me at this article.