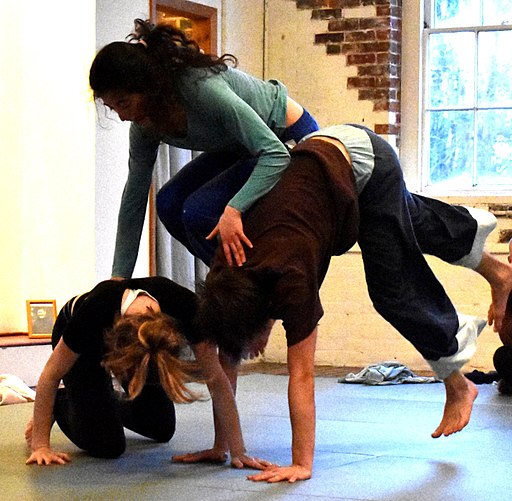 Yesterday, I had the opportunity to go to a contact improv lesson and jam, something I haven’t done in years. For the uninitiated, contact improvisation is a style of dance characterized by the words in its name: the dance is unchoreographed and improvisational, and the dancer strives to stay in contact with one or more other dancers the entire time. The results of this, over the two hours I was there, were profound for my embodiment work, for my sense of self in connection with others, and for my thinking around consent.

I have never been much of a dancer. In fact, I was extremely clumsy and out of touch with my body when I was younger; I remember at one point the humiliation of having to take remedial gym class. I dropped out of ballet when I was four because pointing my toes caused my feet to cramp horribly, and I was the only girl I knew of who couldn’t do a cartwheel. (Still can’t.) Over the years I gradually got more comfortable in my body, learned more of what it could do, and how to push it to do things it couldn’t yet. We had to take credits in dance in my college theatre program, and though it never emerged as a primary talent, I got by well enough.

Later, I discovered things like Journey Dance and contact improv and other outgrowths of the modern dance and meditation movements. Dances where what you looked like wasn’t as important as how you felt, where whatever  movements you made were accepted. Contact, though, remained something I dipped a toe into, and then out again, and yesterday, I was reminded of the why of that particular struggle.

Contact improv is intimate. Potently so. It invites the dancer to connect with another body, in a way that our society has few outlets for. I have always looked on with envy at people who are comfortable cuddling with friends, being in close contact casually, enjoying the simple warmth and pleasure of it. As an only child in a repressed family, it never felt like I was allowed to have that. And we Americans don’t touch each other very much anyway, as I’ve often bemoaned. Men in particular have few avenues for touch that don’t also involve sex. The rise of professional cuddling, cuddle parties, expanding bodywork modalities, and so on are a testament to this: people know they need non-sexual touch, and they know they aren’t getting it.

In this age of #metoo, touch has become an even hotter point of contention than it was just two years ago. Consent – that paramount prerequisite for a healthy sexual society – has been shown to be utterly broken, and we are undergoing a transformation as a society that must start from square one: this cultural moment requires that we return to the first principles of using our words, respecting each other’s space, and assuming nothing. Sadly, while this is utterly necessary, it also isolates us from the opportunity of human touch even more – until and unless we learn better.

I teach consent workshops, and part of my framework for them involves inviting people into their bodily sensations, the way things other than their prefrontal lobes experience ‘yes’ and ‘no.’ My focus has largely been around helping people identify and communicate their ‘no’ sooner and more easily, because of my strong belief that without the availability of ‘no,’ there cannot be a true ‘yes.’ And as a person heavily invested in a healthy and fulfilling sexuality, helping people find their ‘yes’ is my truest goal.

Ultimately, I would love for the majority of humans to be able to navigate consent using so much more than just words. For men especially to be able to read the subtle signals that tell them something is wrong and they should stop, ask, step back. For women and nonbinary people especially to have more access to their words in a way that feels safe for them and doesn’t carry unacceptable consequences. For consent to be – as it were – a dance between people, a series of negotiations that is alive and continually evolving.

Contact improv, as currently practiced, invites that kind of communication by its very nature. When it’s working well, it feels like an intimate conversation: will you dance with me? yes? let’s move this way. will you support this? no? I’ll go this way then. sure, I can lift you. now let’s go to the floor. here comes someone else. can they join? yes? now we’re all here. who’s leading? who knows. this is fun. thank you! i’m going to go now. It’s a flowing, changing, present way of being with others. The thing I noticed more often than anything else was spontaneous laughter: not the embarrassed laughter of discomfort, though some of us were shy and there was some of that. Most of the laughter was surprise, joy, delight. The laughter of this feels good! that was unexpected! I haven’t done this since I was five. The profound rest of laying your head in the crook of an unfamiliar, but supporting, shoulder. The joy and silliness of moving in close contact with one person, only to see another face appear on the floor, moving between one of the dancer’s legs. The places where, as the faciliator taught in the first few minutes, you can find that sense of “ahhhh.”

Naturally, with this kind of contact in a society that’s touch-sick, there is a lot of potential for error. I understand that there have been consent issues and a reevaluation of consent culture within the dance community, and it sounds like that is ongoing. Though I did not encounter it directly, it is very easy to imagine people taking advantage in a culture that’s not only permissive but predicated on assumed consent for touch. In my experience yesterday, I found it welcoming and playful and lovely: at one point, I was stretching on my own when one of the more experienced women came over and started imitating my movements next to me; next thing I knew we were hip to hip, and starting doing funky stretches together. There were a few words exchanged, and smiles and inquiring eyes, and we were off to the races. After a while we spun apart and went to move with others, or alone. Another time I was lying on the floor, and the facilitator leaned over to look at my face upside down, smiling happily at me and saying, “Hellooooo.” I laughed, then sat up, which put my back to him; he didn’t approach further until I’d gotten up and turned around and made clear with eye contact that sure, I’ll dance some with you. But I can see a person making it creepy at the drop of a hat, and the ongoing ‘yes’ of the space being violated by someone pushing themselves on someone.

But that ongoing ‘yes’ was fascinating to me, and felt almost miraculous: what if, I thought, we could exist like that as humans? We used to, I’m fairly sure. Touch was a larger part of our communicative vocabulary, and still is in many cultures. But because the structures of power and the culture of shame has made touch toxic for so many for so long, it’s an uphill battle to even think about exploring it.

There’s good reason for this: as I’ve learned in so many contexts now, touch is a powerful form of communication: much more direct, deeply-reaching, and potent than speech. A single touch can bring comfort, pain, safety, violation, belonging or alienation. And the touch I experienced at this single improv jam reached through to my core: I felt more alive, more vulnerable, more connected, more part of the human family – and it happened almost instantly.

What kind of world would it be, I wondered, if people touched each other like this, all the time? Would people not, overall, be more attuned to when touch is wanted, when it isn’t, and how to communicate that? What would it be like when someone did take advantage, violate someone – or miss a cue and make a mistake? How much easier would it be to tell the difference? How much less frequently might it happen – and how much more quickly could it be caught and dealt with in a compassionate way?

A lot of thoughts from a single event. One thing I do know: I plan to go back. And hopefully, someday, participate in Touch & Play – a gathering that seems to be looking at all of these questions very closely.

One thought on “Contact Improv: a study in touch and consent”